This year I'm keeping all my heifers (so far 4)...Oh wait...last year I kept all my heifers(again 4).  I think I have a herd now!  It'll bring my cow totals to 18 and I have 8 steers and Rudy (the bull) of course.
This newest calf from a couple days ago came from "Baby"!  She's my heifer cow from last year that calved the night of a nasty cold and blizzarding night.  I got there in the nick of time but had to bring her calf inside to melt and survive before the fire.   It took I and my daughter several hours of warming and finally getting the calf up and eating before I was in the "all clear" zone.  This year my cattle started calving again in January but I have the only 4 cattle that were early, and I had them in a barn.  Every time one of them calved though, its been at least 40 degrees or better.  So far it couldn't be better!
I sold the bull this fall that was the sire of all my calves from last year and this year.  They are some nice ones.  Of course almost all my keepers have a percentage of Jersey, but they are all extra gentle.  This year though, they kept extremely well...this weather was such an advantage and nobody had a hard time in the cold.  It has been an amazing winter and one I have thoroughly enjoyed.  It's moved along fast!  Before we know it, I'll have that cycle of babies in full force!

I have 6 more cows to calf with only one in a couple weeks and the rest all in late March.  Since I sold my high-jumping-over-zealous bull, I am not as challenged keeping Rudy separated from the girls.  So far...so good.  I want to breed the cattle in mid June this year.
My next cow to calf is a 2yr old heifer...this is one that my son pulled and I said it was his.  He seriously earned it!  She was a big big girl and she has an incredible nice style to her.  I've had my hay hauling gents here that looked at the cattle and all asked if she was for sale.  I am 99% sure though that Rudy is the Sire to her calf.  I marked the day and she is appearing to be close to the due date.  Since she does have 1/4 Jersey in her background, I'm really wondering what color she'll calf. 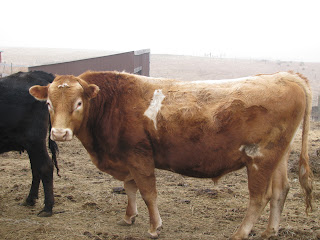 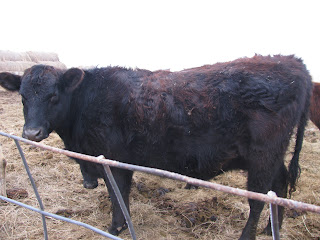 and an oddity that happens lots with cattle...extra teats.  This girl has 6, but the thing with her...I think they may be working teats.  Talk about over-achiever!  Extra teats in the cattle world is not unusual but in the dairy world it really is frowned on, but in beef cattle it happens lots.  Don't know why and it hasn't affected any of my beef cattle when they have small non-developed extra teats.  Since this girl is bagging up though, they appear to be normal sized and attached proper.  Weird huh!? 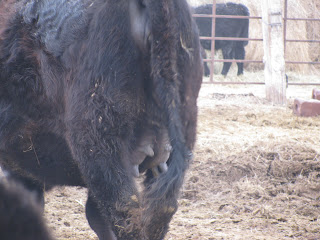