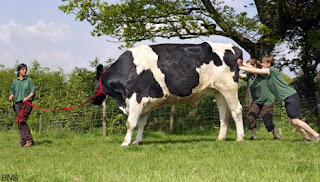 I loaded two of my Fall calves and took to sale last night. Well, actually, I was trying to load my fall calves for sale, while I had the steer loaded the heifer calf got a different idea. She escaped me several times and by the time I was ready to load the rifle, I decide it is time to call the neighbor. Now he is a rancher himself, but also, on weekdays he works the Sale Barn. He was on call last night for unloading trucks for Fridays(todays) sale. I had gotten a call from him around 5:30 before supper and he knew I was loading a couple of calves to take in and he said to just give him a call when I wanted to head in. I thought he would just as well ride with me into town and by the time I was struggling with the calves to load, I thought he could perhaps help me to loadtoo? He was over pronto and with the help of him and an extra panel, we finally had her loaded up. We head in. Now we weren't thinking about the possibility of trucks waiting for him in town, as random ranchers are bringing in livestock for the next days sale. He leaves his number on the wall and the routine is a seller will call him and he scoots to town. We got there and unloaded and as we where about to load up for home, in drives a convoy of semi trucks. He tells me,,it could be a while now. I offer my help in pushing any cattle up the alleys to holding pens. The calves were no problem and unloaded quickly and escorting them to pens was a cinch. If you have ever been to the stockyards of an Auction Barn, it is an amazing maze of alleys and escapes and gates and pens. You can get lost in the alleys at this one, as it's the largest in the State. The last of the trucks were unloaded and it was getting dark, but we see one more pickup pulling in. It has a long fifth wheel trailer and it looked pretty loaded. The cowboy got out and he has just 4 to unload. I was standing in the alleys when he noted and told me to get up on the fence. I was quick to comply. I don't work there you see..just helping..don't expect miracles here I assure him. He let the back of the trailer open...out walk to nice young yearling calves. Not huge, but possibly around 800 lbs. I was thinking he must of thought I was some sissy or something...those were not a threat...when I note the trailer is rocking...fur sticking out at all spots..and beginning to wonder if he was carrying Buffalo. He told me to get over the rail now. I scrambled...he fought with the outside latch to get the middle gate of the trailer open and finally says he is going to grab something to give it a nudge and heads to cab of pickup. Thats when the gate sprung with the trailer bouncing. Honestly, I don't know how he kept that pickup on the road with that much weight. He was huge!! Looked like over a ton!! When he entered the unload area, it took up all the space. My neighbor who was on the job, took charge and sprang into action moving him up the alley a bit. The other boy who was still in the trailer was wanting his door open and as the Cowboy was flipping the latch to let him out..the big brute did it himself and the gate crashed open and in an instant the next boy was out. Now, I have been ringside and watched some big bulls enter the arena, but this boy was enormous and up close and personal, I can only wonder how those Cowboys would ever want to ride one of those beasts. Now, I didn't want to sound like a City Girl and was trying to come up with something to say that was respectful of his livestock, so I say, "I suppose you raised him from a bottle baby?" He smiled and told me.."yup...he was the runt of the litter!"
Posted by DebH at 9:19 AM