I had my enthusiastic Granddaughter for a sleepover... 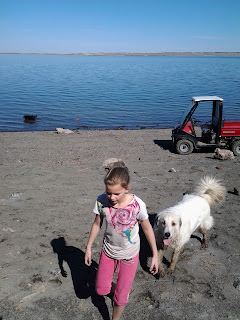 and she doesn't mind getting a little dirty...and because 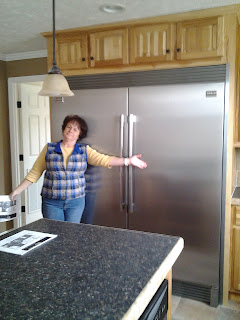 my best buddy and go along with anything...stopped over with her hubby
(note...photo was taken the day before as we were house shopping for her...I only wish that was my fridge) 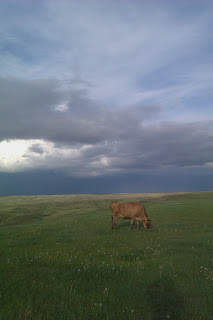 I had walked across the pasture just a week or so earlier and found a small little glass bottle completely intact with the lid still secure...
I told my hiking buddy about it and she was anxious to come have a lookabout and see what might else be lying around.
My Granddaughter is just the best little outdoor buddy you could ask for also, and she was ready for any sparkly treasure we might find.
I took a potato fork and dug a little fork full of dirt and we all were down on hands and knees checking out the cobalt blue glass that was peeking up at us.
I went to take another dig with the fork and my 10yr old Granddaughter was grabbing me to STOP!!!  She was going at it with fingernails before I could damage what she was thinking was an intact blue bottle.
Thats when it started..it became a bit of a frenzy and I was sent to the house to fetch buckets, gloves, screwdrivers and the mule to carry anything we found home.
We didn't disturb a patch of soil no bigger than 5x5ft and we only dug below the surface some 6-10 inches at most.
While alot of it was old broken depression glass, we did find some fun and romantic things.
My Granddaughter found an old skeleton key and she just thought it was about the best thing of the day!
My good friend found a lid to some fancy glass powder puff decanter or small display jar that was striking.
And she also found a syrup pour bottle.  Her husband found a pop/beer bottle opener and several very cool metal items.  I found several tiny little bottles that intrigued me most.
While I think this most likely dates to a dump in the 40's-50's, we still had a blast finding intact bottles and the oddities of someones previous kitchen. 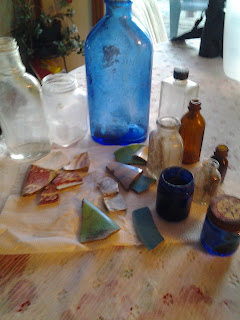 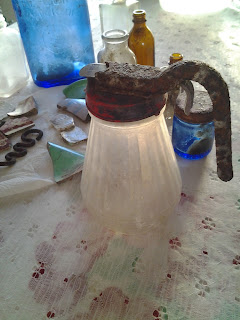 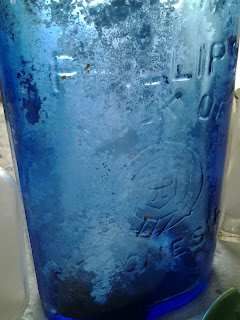 and I know its Milk of Magnesia and Vicks vapor rub glass...and I (sadly) remember using these very items, but to think just inches under the soil where it shows no signs of any rubble, there were so many different things.
Just a couple weeks before we did the little dig on Sunday, I had found some iron pieces lying semi exposed on a side hill. 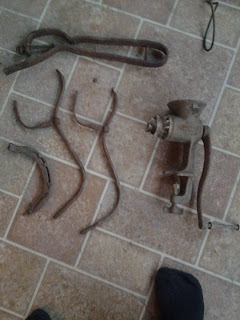 a broken shoe for a mule, some side arm brackets for a buckboard seat on a wagon, an old meat or wheat grinder, and the top item is a hitch to a wagon harness...now these items date much earlier. Perhaps the early 1900's
(the grinder has an patent date of 1889, and I know this isn't likely that old, but still very cool)
I only found out about what the other items were after I took them down to a neighbor of mine to identify.  This older fellow told me about dugouts...
I knew about the sod houses that people tried to homestead in but I didn't know they were "dugout" into large holes and around my area there are still the remnants of several. Imagine living in this rugged cold and hard South Dakota winter and trying to survive in a sod house dug into the ground some 8-10ft.
Now, I've walked my pastures and to the river many times and after this weekend, I have a completely different thought on life on the prairie.
Someday I'm going to take him a couple dozen eggs and a few bars of goats milk soap down to my neighbor and ask a few more questions.  I am thinking me and my buddies are going for another hike!!
Posted by DebH at 11:01 AM