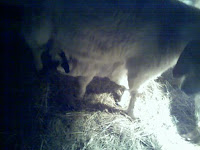 It worked...we were staying up late watching ..Austrailia. First time I had watched it and it was in the last few seconds when (while watching closely Peach on my laptop wth the webcam zoomed in on her) that I see she is really really uncomfortable. I had been noting her up and down and the far away look for most the show. She would dig,,she would lay...she would stretch and then she was just down and hollering for help!! I think I saw the last of the show...I think...what a good show it was though..anyway, I ran helter skelter for a bit and forgot the towels the blow dryer and my head. I got there with inside baby under arm and pulled off the diaper and set her down behind me while I crawled in pen and watched Peach to see if I needed to assist. She was hollering alot and see no real advancement, although I did see feet,,,no nose was following. I reached in a bit and see their is one Giant Head and my poor little Peach. I waited a short while and had to help. It was an awful tight squeeze and wonder now if I had left her she would of ever gotten that head out. I am again, so thankful for the camera. Meanwhile, inside baby is all over the place playing and hopping like a 2 day old should. Perhaps she was just so excited to have a Real Goat Mommy!!! Wish I had the video camera, it was amazing.
After a dousing of the bubble fluid, Peach snorted a few times at her and was most likely surprised at the energy of what may have just caused her alot of pain. I pulled her just born baby around to her nose and let her smell her also, and just stepped back.
Nature did the rest!! Take a look!! It was a little dark in her pen but all is well and Mother and her Two babies are resting very Happily!!
Posted by DebH at 8:48 AM