and the friday weigh in continues.....

with a weekly loss of 2.6lbs!! Total weigh loss in 6 weeks 14.2lbs.
Again I was afraid....
thinking I had overeaten since I beefed up all my protiens and also added a daily slice of bread.
Also I lost 4lbs of fat and added 2lbs of muscle. They like that! (but still not so convinced on the calulations their little machine gives you)

Seems I was needing the extra protien but I sure don't want to be lulled into the notion that eating extra is the key!! I could almost fall for that right now!

Yesterday my diet buddy and I went to the big city and shopped and goofed
We also made the "Grand Opening of the new Sams Club"...
"Say Sharon are those muffins for you??" 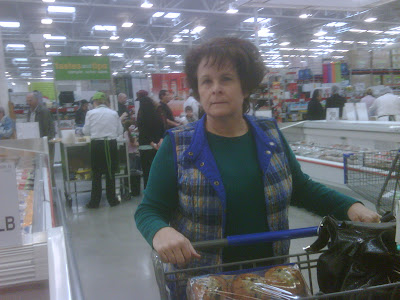 Ok...I admit they were purchased by me as I do have 3 young people at my house who eat ALOT!!

We did however find ourselves at Olive garden and we enjoyed the unlimited bowl of salad and actually did have it refilled at least 3 times. Also we splurged and had some soup and pretty much just spooned through the broth. We are motivated and will stick with this!! And we will be taking those famous photos of us in the exact same place we were standing last year deep in the heart of the Badlands. They were not photos I have shared (they were some before pictures) and I will HOPEFULLY be most proud to share them in a couple short months. Even if it takes just a little longer to get there, I think we have definitely found a different attitude on our foods. Its lots lower on fats, lots lower carbs and NO sugar thats pretty much the routine. Lots and lots of veggies and a pretty reasonable portion of lean meat. No real fad ..but just a very controlled portion of food. Did I mention the fact that there is NO alcohol!! I know I will be craving that frosty mug when summer hits and I need my "Toddy for the Body" after a hard day outside. I always like my reward after working in the garden or fixing fence and the million other outdoor tasks it takes to repair this place after a long winter. Seriously...there has to be a reward!! This dieting is just plain HARD.....but I know it's all going to be so worth it!!!!
Cheers!!!
Posted by DebH at 12:11 PM