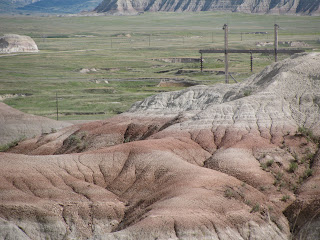 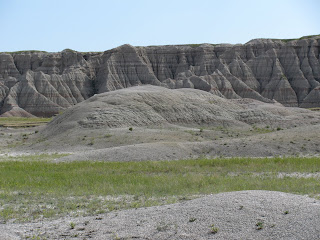 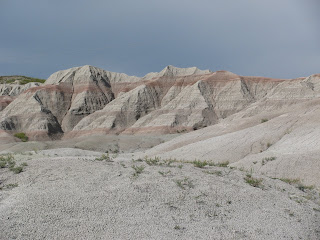 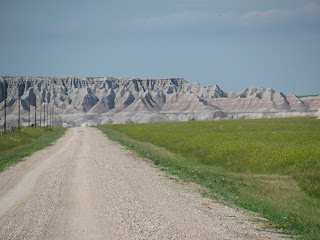 I have a hobby I truly enjoy. Rock and Fossil Hunting!! Now the fossils are of the marine variety and in my back yard are perfectly legal...but the agates....oh my! Fairburn Agates are the state gem. They can be found in and around the southwestern part of SD, well if you are lucky.. and very observant that is. For years, people travel to designated areas in the Badlands for the lure of a that one of a kind Fairburn. This area looks like you've landed on Mars. It's a spectacular place, but pictures will give you a good idea of the view.
I talked with my VBF on Friday and made a plan to head to the hills on Sunday!! Nothing stopped us. In the past, we would pack up and head to all areas around us to hike and return with the most amazing finds. What we always came home with was a good story and wonderful memories. This Sunday was a was our new start to refind our hobby. It has been at least 6 years since we were out for a true rock exploring hike in the Badlands.
We started pretty early on Sunday and Sharon packed her world famous turkey tomatoe chili wraps. It takes about 2 hrs to get to the spot we like and around noon we were in the Agate Fields of the Badlands.
When we got to an open area, we noticed another car and people out walking the land with that telltale sign of stooped posture and all eyes on the ground with backpack and digging tool in hand.
We picked a spot and were out scanning the ground in separate but visible locations.
It was a pretty warm day and when Sharon suggested the lunch break I was ready!!
This video shows the agate fields. Agate Fields are a geological exploration all on their own. I am getting a little better with the camera and apologize for moving around to quickly. I will know better next time. The few close up shots of the ground show you the incredible amount of agates you can sort through.
http://www.youtube.com/watch?v=wZ7yU4_iyGA
We set up a nice shady spot with the hatch of the car open and two lawn chairs..cold beverages and fantastic wraps with chips. We were just about done with lunch when a vehicle approaches and slows to a stop beside us. The husband/boyfriend eyes us carefully and asks if we had any luck. The wife/girlfriend was driving and they both are waiting with very serious faces for an answer. I said we found some nice bubble gum agates that we really liked. Then I asked them how they were doing?? They said 1 small Fairburn!! What...I ask??? Where, what does it look like..ok I gotta see it!! Thats when their door opened and they were all over us. They were just waiting for an invitation and I think our enthusiasm broke the ice. They started telling us about how many they find and what kinds and we started to feel like failures. Sharon and I have not actually found one fairburn while we have been out...or rather...we don't think we have. They do have a distinctive look and character. They were explaining all their secret places and what they look for and if we wanted to follow them?? Well...pack er up Sharon...we are going. They drove us to the next spot and as we started to hike in different directions, I noticed the girlfriend was carrying the proverbial digging tool ..a screwdriver...which so happens to be my favorite choice of agate hunting tool. Thats when the boyfriend pulled out his sword...OK...Sharon said it was merely a Bayonet but I still think it was overkill. They did seem like an awfully nice couple...right!! And from the area of course....and so willing to take us to a remote part of the Badlands. I got down a path putting some distance between us before I pulled out my cellphone and actually had a signal. I called my Daughter in law and told her my location, the people we were with and if not back by sun-up send the force. She laughed....but jotted down notes.

Ok..we walked for about an hour and when I returned to the car, Sharon and our new friends were already waiting. They invited us to their house to see their treasures and like any REAL Fairburn Explorer...we went. I am so Thankful for wonderful people who would share their enthusiasm of a good hunt. They ended up having some incredible agates and have several of their own Beautys featured on the latest Agate Book out in publication.

In one of the photos, it shows the Fairburn from a postcard that was the cover photo and the real agate in his hand.

We are going back Sunday..and just maybe we will actually go on a semi weekly basis now. Regardless if you are rock hunting or hiking, the Badlands of SD are something everyone should see at least once. It amazes me everytime I go there!! 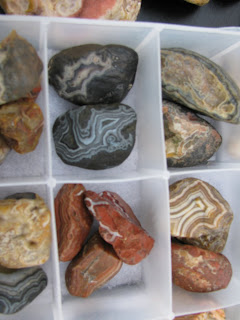 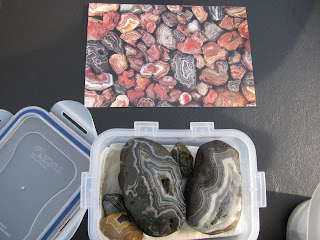 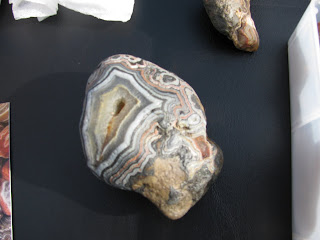 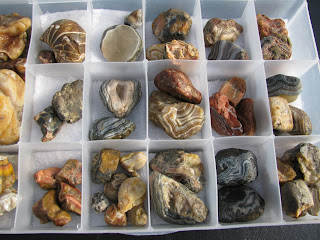 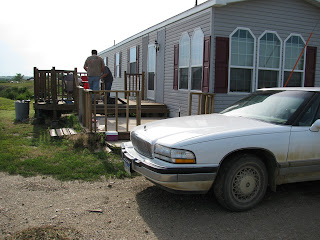